The Local Quality Pact Northern Peloponnese “Mountain” is a collective effort entities and businesses in the region set up to facilitate cooperation between enterprises (partners of the Local Pact), in assurance issues, improvement and enhancement of the quality of the products and services and promote them to a wider market. In particular, the operation of the Local Compact is designed both to assist in:
◾ identify and promote local products
◾ to upgrade the quality of products and services
◾ the promotion of the region and
◾ the overall improvement of the tourism product of the region.

At the local pact involving companies operating in the wider tourism sector and small and medium enterprises engaged in traditional crafts and manufacturing activities such as:
◾ Restaurants and taverns
◾ guesthouses, accommodation and hotels
◾ Wineries beekeeping workshops and associations of organic producers
◾ Enterprise standardization and marketing of consumer products
◾ Enterprise service alternative tourism and
◾ Enterprise craft activities.

The purpose of the Local Quality Pact is through cooperation and mutual commitment of the participating companies, to form a whole “identity” quality, which would become synonymous and qualify products produced and services offered by businesses region. Creating a quality defender in the “heart” of the “Island of Pelops” Local Pact aims to become a reference point for visitors on the one hand and guide for businesses in the wider region of the other, contributing in this way to the overall improvement of tourism product of the Peloponnese. 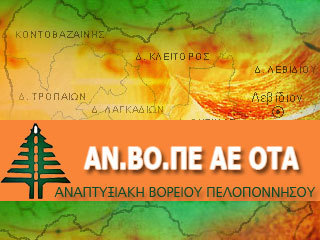 Developmental of Northern Peloponnese (AN.VO.PE. SA OTA) is the body that implemented and supported by the European LEADER program in our magnificent area.

The Leader + is one of four initiatives financed by EU structural funds and is designed to support rural actors consider the potential of their area from a longer term perspective.

Quality standards
Lab Standards Accommodation Standards Restaurant Standards
Participation in Local Quality Pact
Participation in Local Quality Pact
The company Local Quality Pact Northern Peloponnese ” Mountain ” is a non-profit private entity ( private entities ) and any businessman from the region of North Peloponnese , who is active in the production of local products and / or services tourism , rural tourism , catering , catalysis etc can become a member of acquiring all rights to vote and stand for election and participating equally in decisions. Any interested company can apply to the Local Pact application file , which describes , among other things, how to customize the quality standards set by the Local Pact . The request was considered by the Governing Council of the Territorial Pact nomimomita controlling both the firm and its compliance with the requirements of the Local Pact . In case of acceptance of the request, the company is asked to sign a contract , which fully accepts the principles and the conditions and specifications of the Territorial Pact .
More specifically , each new member is asked to sign a contract which will accept :
◾ The basic principles of the Territorial Pact .
◾ The conditions for awarding the label Territorial Pact .
◾ for regular and occasional checks on the application of the Territorial Pact .
◾ obligation to participate in the activities of the Local Pact ( General Assemblies , training etc ) .
◾ Reviewing the participation of the Local Pact if parakolefei its operation, hinder the operation of , damages the reputation or not systematically shows interest in furthering the objects . Defective or non- compliance of the company with the above conditions may result in penalties to reach up and deletion of the enterprise in the CIS and the consequent removal of specified quality label. Please note that membership is not assigned or transferred .
Services to Members
The Local Quality Pact Northern Peloponnese provides to its members the following services:
◾ Award special signal to those operators satisfy the conditions and requirements of the Local Quality Pact.
◾ Establishing quality standards for construction, equipment, raw materials and products, services-organization-administration, staff, health / safety and environmental protection. ◾ Implementing the assessment and monitoring compliance with the quality standards of the participating businesses.
◾ Update – awareness of the local population and all public bodies in terms of quality.
◾ Elaboration investigations relating to the promotion of local products and services and the satisfaction ratings of the services provided in the region.
◾ Project evaluation of the CIS and redefine the quality standards wherever appropriate. ◾ Powered partnerships related to the development and promotion of the area.
◾ Design and implement training.
◾ Planning and organizing joint activities of promotion of local businesses.
◾ Creating a common infrastructure to support the needs of the member companies of the CIS.
◾ Monitoring the legislative framework and inform members.
◾ Monitoring the economic environment and inform members.
Businesses – Members Member Request in Local Pact
Share this post:
Facebook Twitter Google+
In partnership with Hellenic Agrotourism Federation.
Tech support by Ecowebdesign Ltd.